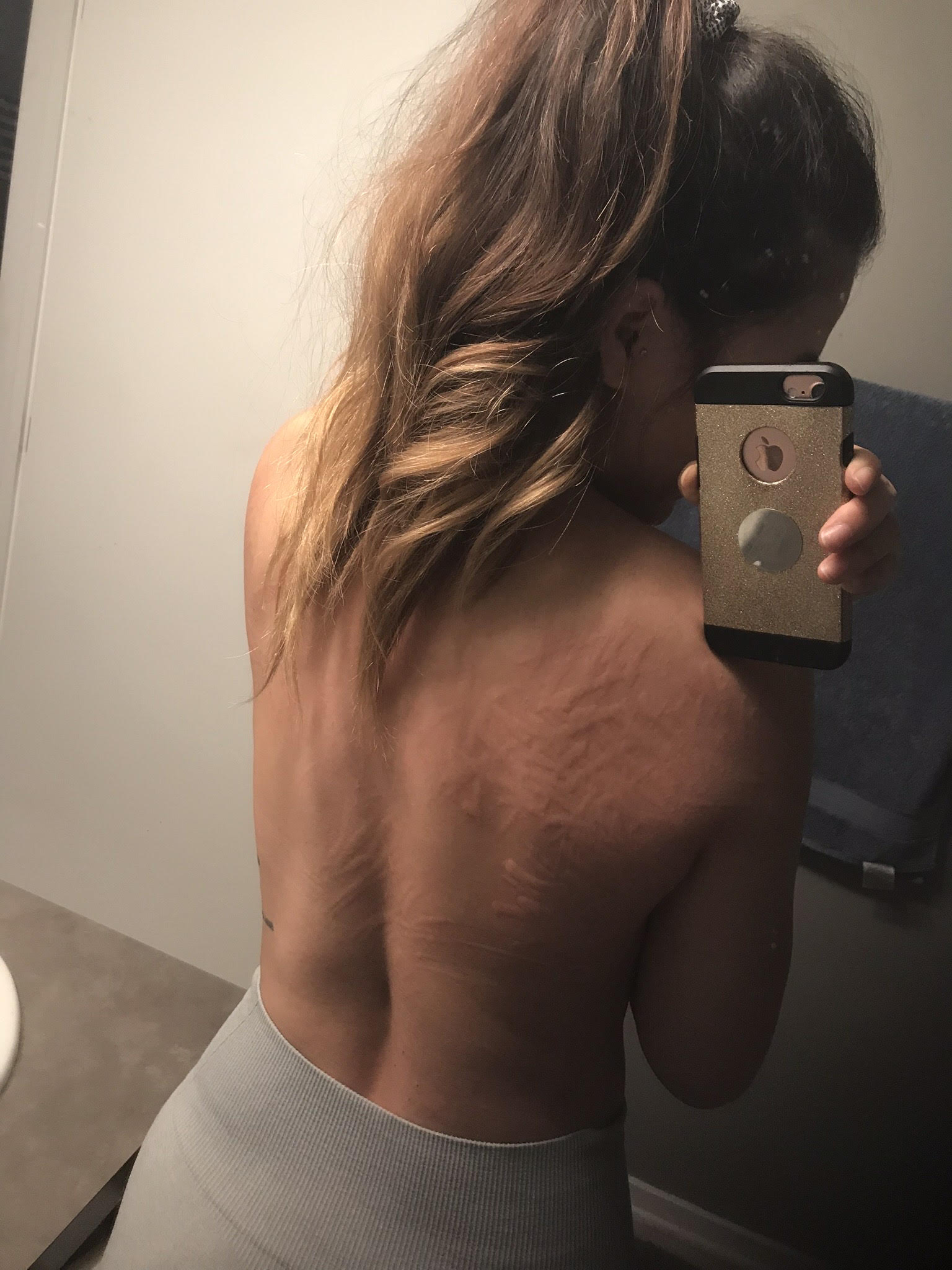 I wanted to bring awareness to my chronic skin condition, known as Dermatographia. Dermatographia quite literally translates to ‘skin writing’. This is something I have been dealing with for the past 5 years and I want to open up about. I didn’t know the term of this condition for a long time and struggled to find answers. Last night, I stumbled upon a YouTube video of a girl talking about the same skin condition as me and it inspired me to share my experience as well.

My story begins 5 years ago when I woke up in the middle of the night to intense itching sensations. It was all over my body – started from my legs, then my chest, my back, ears, face, and eyes even. I remember that I stayed up until there was sunlight peaking through my windows. When I went to the bathroom the morning after, I was shocked at what I saw. My skin looked like it had been whipped, my scratch marks had risen and looked 3-D. I was confused as to why this had happened and thought it may have been bed bugs. I checked my bed thoroughly and didn’t find anything. At this time, I thought that the itching would go away after a day or two. Maybe it was something I ate?

After my second and third night of constant itching, I knew that something was not right. Not only did I stay up itching all night, I also did a lot of google searches to try to find out what was wrong with me and why it’s happening to me. These searches didn’t really help and I found articles that scared me. When I read that I had the same symptoms as someone who said that they had a tumor, I grew nervous. I knew better than to diagnose myself with wikipedia and google, but I was desperate for answers. I made a doctors appointment the following week when my itching continued. The doctor suggested that I probably had Dermatitis (dry skin) and had prescribed me a steroid topical cream. This didn’t help because I wasn’t itchy in one area, I was itchy everywhere, and a small tube of topical cream was not going to cut it.

My itching continued throughout the weeks and I was miserable every single day. I struggled to find the answers and I became extremely depressed. I thought to myself, there’s no way I can take another day of this. I had such dark thoughts and I felt like I was going insane. Whenever I tried to explain to anyone about what I was going through, a lot of the responses I would get was, “Just try not to itch, it’ll go away.” That’s not how this condition works and I felt like no one truly understood what I was going through.

Several months later, I was able to make an appointment with a Dermatologist. She pretty much said the same thing as my doctor and suggested that I just had dry skin, which causes itching. She had suggested Epson Salt bath and that it would help with the itching. This suggestion was also a temporary fix. I needed this to go away for good.

More months had passed and then years. Still dealing with the constant itching and welts all over my body. Imagine having mosquito bites all over your body and not being able to get relief every single day. It’s enough to drive anyone mad. I’ve tried so hard not to itch but if I don’t itch, it starts to sting. Like there are needles poking from inside. Two years had gone by and I had an appointment with an allergy specialist. He did all sorts of allergy tests on me and I wasn’t allergic to anything but .02% dust mites. This was obviously not the cause of my itchiness. He started to ask me questions about what I was experiencing and I had told him everything. I think he could tell that I was desperate and on the verge of tears trying to make someone understand. ANYONE. He told me he would be right back and left the office. Then he came back a few moments later and told me he believes he knows what I have. He said I think you have Dermatographia. I forgot how he explained it to me, but I remember when I got to my car it was the first thing I looked up on my phone.

I started to read about Dermatographia and this was IT. This is what I have. All of the articles I read on this condition lined up with my symptoms. I finally have an answer and started crying because after years and years of asking doctors, friends, dermatologists, this allergy specialist was finally able to solve the puzzle that I have been trying to complete for so long. He had also suggested to me to take an anti-histamine that was over the counter. It helped with my itching, however, it made my heart pound like crazy and made me feel like I had drank 5 cans of Monster. I decided that I couldn’t take that anymore.

I spent another year back where I started. Itching everywhere, all the time.

Finally, I was at my boyfriend’s house and found allergy pills in his cabinet. I was desperate, so I wanted to try it. It was an anti-histamine as well. IT WORKED! It stopped my itching and I felt so free for the first time. I thought that it had gone away forever and forgot what it felt like not to go through the whole day with the urge to itch all over. Much to my disappointment, the itching came back after about 24 hours. So I took another the following day, and then the day after that. I have been taking this allergy medicine every single day for the past three years now. It is the only thing that I found that works for me. The only downside is that it makes me extremely drowsy. I used to take it during the day and I found that after a couple of hours, I would be extremely sleepy. I started to take the medicine a couple hours before bed and it seems to be working best. I’m so glad I found the relief I was looking for. I can’t explain how it feels.

I’ve always been a healthy individual, I rarely get sick, and eat clean. There is no good reason as to why I suddenly got it. I still question ‘why me?’ to this day. I know I will never get an answer. I did find that only 3-5% of the entire population has this condition. I’m one of them.

The reason why I wanted to bring awareness to this is because of the YouTube video I stumbled upon last night. Had I found that video 5 years ago, I wouldn’t have felt so misunderstood and alone. I would have known that there ARE people out there who experience the same thing as me. I hope that someone who is experiencing the same thing as me finds this post and doesn’t feel alone, or feel like they are crazy.

Archive of all blog posts